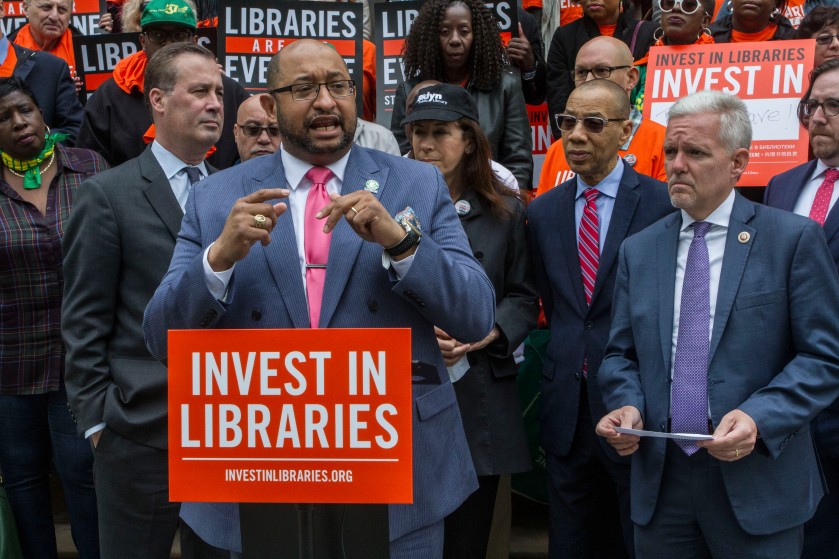 DC 37 Executive Director Henry Garrido, joined by heads of the city’s three library systems, activists and city officials, speaks out in favor of library funding at a press conference at City Hall on May 18. Photo: Mike Lee

The union scored several major victories in this years’ city budget process, including getting $16 million for public library operating expenses and $60 million in capital funding sought by DC 37 leaders and members.

The New York City Council approved the $89.2 billion budget for fiscal year 2019 in a late vote on June 14.

“We’re pleased we got the funding in the budget that we needed in order to continue to provide the kind of service the public deserves,” said John Hyslop, president of Queens Public Library Guild Local 1321. “Our libraries are busier than ever, so those funds are critical.”

Union activists waged a grassroots campaign to urge Mayor Bill de Blasio and the City Council to add the additional $16 million in expense funding to continue six-day service and programs and $60 million for capital funding to repair roofs and install air conditioning and ventilation systems.

“In order to continue to maintain our communities by keeping those undeserved parks in our neighborhoods beautiful, the support of the City Council is vital,” said Dilcy Benn, president of Local 1505.

Benn along with other DC 37 leaders shared their concerns regarding the budget and city services before City Council leaders during the recent finance committee hearings at City Hall.

“During the past few months DC 37 has fought to bolster the services essential to New Yorkers, like our parks and public library system,” DC 37 Executive Director Henry Garrido said. This budget includes additional funding for those services.”

The mayor and City Council members announced the budget agreement on June 11.

The adopted budget also includes $10.3 million to expand the Summer Youth Employment Program from 70,000 to 75,000 slots. Members of Local 983 work in the program as supervisors. The budget provides funding for additional supervisors.

Copyright © 2021 Start a Blog at WordPress.com.