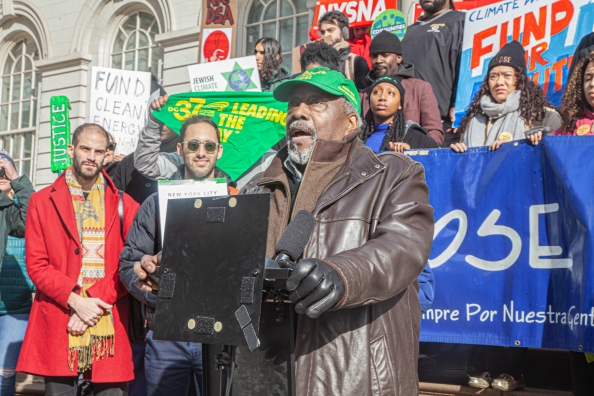 District Council 37’s Associate Director Oliver Gray, who helped guide two of the union’s Executive Directors with a quiet, yet proactive approach since 2002, died on June 29, three days after suffering a heart attack in his home in Manhattan. He was 79.

Until his death, Gray was deeply involved as a guiding force for the union during the COVID-19 pandemic, including preparing Union Headquarters at 125 Barclay St. for the next phase of the long-term modernization of the building, as well as serving his other duties assisting Executive Director Henry Garrido, and supervising the DC 37 staff.

Both in times of relative stability and during the tough labor struggles in helping lead the fight against layoffs during the administration of Michael Bloomberg, Gray remained calm during crisis.

He supervised the recovery of Union Headquarters in the aftermath of Superstorm Sandy, helped strategize in responding to the changes wrought by the Janus decision by the U.S. Supreme Court, and later helped transition to the temporary headquarters at 55 Water St.

“The labor movement has lost a quiet giant,” said DC 37 Executive Director Henry Garrido. “He was incredibly calm in times of crisis.”

Gray was so much more than one of the leaders of the largest union in New York City. He was a mentor to many staffers who, like a gardener, he nurtured with soft-spoken advice, pulling them out and up into leadership roles, encouraging and inspiring them by sharing experiences from the vast wealth gleaned from decades of experience as an activist, civil servant, and also an artist.

An inside man who always thought outside of the box, Gray had an innate ability to stage-manage the intricacies of helping run a 200,000-member union through two mayoral administrations. He did so with a quiet demeanor, often edged with a humor that reflected wisdom and his personal experiences.

“He was happy to help, push, fight, and demand, but his name never had to be part of the discussion and that’s a rare quality,” Garrido said.

Gray grew up in New Haven and Hartford, CT, graduated from Hampton University, and later received a master’s degree in urban planning from Hunter College. He began his career in the city’s civil service, working his way up the administrative ladder at the city’s Health + Hospitals Corporation, eventually rising to Assistant Vice President of Community and Patient Relations.

In 1983, he was appointed by then-Mayor Ed Koch as a special adviser on race relations, immigration, and public education. As the city’s Director of the Bureau of Labor Services, Gray served as a liaison with municipal labor. Later, he worked at the City Council as Director of Human Services.

In 2002, after replacing Lee Saunders who had served as Administrator of DC 37, Executive Director Lillian Roberts picked Gray to be her Associate Director.

With his personnel experience and keen eye for talent, Gray immediately set to work developing a new generation of union fighters, prominent among them current Executive Director Henry Garrido. He also acted as a point man during often contentious negotiations with the Bloomberg administration, and was key in the effort in developing innovative approaches in reframing organizing and union communications.

He took a personal approach in his dealings with staff, often calling some into his office for long discussions about a variety of subjects, giving counsel and advice to staffers who he saw had potential to grow in their careers as ardent union activists.

A bibliophile with a large library devoted to the African-American experience, and a prodigious jazz collection, Gray enthusiastically shared his interests with others.

Since the early 1960s he also was a photographer. In his East Village neighborhood, Gray could be seen riding his bike, camera slung across his back, stopping to take photos of the neighborhood. Sometimes he would walk the streets, camera in hand, searching for a scene, a moment, to capture.

Above all else, Oliver Gray was a soldier of labor, based on his experiences of growing up during times of struggle. He also emphasized education, taking on himself the role of teacher for so many of those who worked for him at DC 37.

Gray is survived by his son, Nkosi Gray-El, and a granddaughter. A celebration of his life was held at the Bentas Funeral Home on Sunday, July 12.