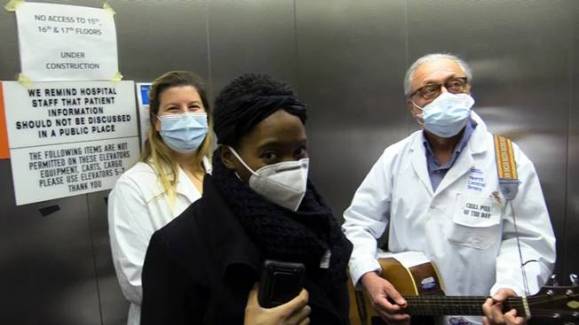 Tony Scarpa of North Central Bronx Hospital’s Creative Arts Therapy Department gives an impromptu performance of, “Here Comes the Sun,” for a crowd of five in one of the hospital elevators on May 5, 2020. Photo: David Greene

As mega performers like Elton John, Billy Joel and Beyonce remain sidelined during the coronavirus pandemic due to the closure of most concert halls around the world, the sound of song and yes, even some laughter, have continued to fill the halls, rooms and even the elevators at North Central Bronx Hospital (NCB).

Over the past few weeks, members of the creative arts therapy department have been spreading much-needed joy and light relief throughout the hospital, located on Kossuth Avenue in Norwood, with their song and dance performances, to the benefit of both patients and staff.

Singer and guitarist, Tony Scarpa holds what may be the first concert in North America inside an elevator at North Central Bronx Hospital on May 5, 2020. Photo: David Greene

In a poetic moment caught on video on May 5, New York City Health Care Employees Local 768 Music Therapist Tony Scarpa, 68, a resident of Long Island, gave an impromptu performance in one of the hospital elevators to a crowd of five, as he and his partner, Alexa Palmer, were on their way to another floor.

Scarpa played, ‘Here Comes the Sun’ by The Beatles to the delight of those present. In the video, one hospital staff member is seen smiling and moving her head to the song’s rhythm during the brief elevator ride.

During a telephone interview with Norwood News the following day, Scarpa explained that he and his partner, Palmer, 30, are officially dubbed the music and emotional support team at the hospital, while unofficially, the duo are known as “The Chill Pills”. Palmer is a creative arts therapist. Scarpa said, “I play the guitar and sing the songs, and she dances with them,” referring to the patients.

Scarpa explained that usually he works as a music therapist as part of the hospital’s program for assisting people with mental illnesses. “That’s what I’ve been doing, but what happened when the COVID came to the hospital, they closed the program to make room for the COVID patients,” he said.

“So, I wasn’t doing that anymore, so I went to the CEO of the hospital and requested that I do this, which would be providing stress relief and emotional support to patients and staff,” he said. “I’d go around and do music therapy with them.”

Since receiving the blessing last month of Cristina Contreras, executive director at NYC Health and Hospitals / North Central Bronx, the duo has been busy circulating throughout the hospital, performing for staff members and patients on different floors, even sometimes bringing along other instruments and song sheets with lyrics in case people want to join in.

“They play the instruments and basically just have a good time and take their mind off of their problems and stress,” Scarpa said.

As Scarpa belts out tunes, Palmer, a dance and movement therapist, gets the crowd involved in the show. “I help the staff and patients physicalize and move the body as a form of expression, socialization and stress relief,” she said. “I focus on the non-verbal expressions, and create a supportive relationship from there, through mirroring and attuning to their movements, rhythm and mood.”

Movement and dance, according to Palmer, is also a great form of providing joy, connection and emotional release. She said she gets a lot back from her job at the hospital’s creative arts therapy department. “[It] could be draining, but it’s also very rewarding, especially at a time of crisis,” she said.

Like any group before a big gig, Scarpa and Palmer go over their playlist daily. Scarpa said it includes about 20,000 songs, and comprises groups like The Beatles, The Black Eyed Peas, and Maroon Five to name just a few. He said he tapes his day’s playlist of thirty or so songs that he deems “appropriate” for that day on his guitar. However, he said people usually request songs too, so that can change things up.

Dealing with a diverse crowd at the hospital has its challenges too. “You’ll get more people joining in with the older songs,” Scarpa said.  “Yesterday, we got a request from a woman who was actually a COVID patient, and we were actually playing for the staff, and the staff suggested we visit her because she likes music.” He said when The Chill Pills arrived at her room, the patient requested, ‘We are The World’.

Recalling their work at the height of the pandemic back in April, Scarpa said the song choices were a little different then. “The songs at the beginning, when the outbreak first took over, were songs like, ‘Lean on Me’, more about caring, and compassion and helping each other,” he said.

“I don’t know if you know the words of that song, but it’s more about someone saying, ‘I’ll help you and then you’ll help me, and we’ll help each other,’ – more songs that are directly related to the sadness and the grief everyone was feeling in the early weeks,” he said.

At one point during the interview, Scarpa became emotional as he recalled his first performance just after the outbreak of the coronavirus in New York City. “The first person I went to, I started playing, ‘Stand by Me,’ and gosh, we probably weren’t into the song 15 seconds and the woman that I was playing for was right behind the desk and she started crying,” he said.

After the seven-week ‘PAUSE’ order, and the partial closure of the entire city, Scarpa said things are now looking a bit different. “Now, things tend to be lightning up and people are enjoying more happier music,” he said. “I’m not being reminded so much of the COVID anymore, and people just want to have a good time, and that’s the stage we’re at now. We’re starting to see the light in the tunnel and things are getting better.”

Recalling his most recent hospital performances, Scarpa, who first performed at the 1964 World’s Fair at the age of 12, said, “The thing that affects you the most is the demand that people had to hear these songs. I felt like they were in a desert and I had water”. He added, “I can never remember a time when people had a connection to music like that.”

The Chill Pills continue to perform daily at NCB. Their largest concerts are to crowds of about twenty and are held in the cafeteria or in the hospital’s lobby. The entire team of art and movement therapists had planned to do something special in honor of Nurses Week, a national celebration which runs every year, since 1993, from May 6 to May 12, the latter being Florence Nightingale’s birthday. Though their exact plan didn’t come to fruition this year, the impromptu concerts around the hospital served as a tribute of sorts to the hospital’s nursing staff.

Celebrations are conducted on these dates to recognize the contributions that nurses and nursing make to the community. The American Nursing Association supports and encourages National Nurses Week recognition programs through the state and district nurses associations, other specialty nursing organizations, educational facilities, and independent health care companies and institutions.

In a statement issued by Contreras, she wrote, “Singing, listening to music, and dancing have uplifted hearts for centuries, and in the clinical settings have been associated with improved outcomes”.

Contreras added, “Our music therapy program has proven to be a potent tool for improving employee morale and patient satisfaction, and functions as an extension of the care team. The physical, psychological and social effects of the music therapy are a catalyst for healing, and as such a crucial component of the ancillary services we offer our NCB community of both staff and patients”.

This story originally appeared on Norwood News on May 14, 2020.

Singer and guitarist, Tony Scarpa holds what may be the first concert in North America inside an elevator at North Central Bronx Hospital on May 5, 2020. Photo: David Greene