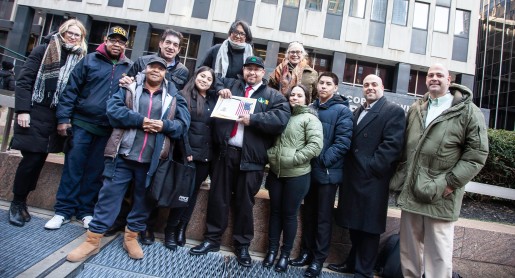 Almost seven years to the day his immigration nightmare began, Local 983 member Jose Molina began 2020 with the oath of citizenship. His family, union leaders, and a cadre of immigration lawyers and supporters witnessed the swearing-in ceremony at Federal Plaza in lower Manhattan Jan. 17.

“I am just so happy and thankful that this day has come and I am finally an American citizen,” Molina said. He came to the United States as an infant and faced deportation to Panama for a crime he committed and served time for more than 20 years ago.

Molina, an Associate Parks Service Worker, was initially detained in 2013 after an early-morning raid of his home by Immigration and Customs Enforcement agents. He was arrested again after he reported to immigration court to comply with a judge’s orders.

DC 37 monitored his immigration case and fought on his behalf in union media and in the chambers of the City Council.

“If it wasn’t for you guys my life would have been destroyed. There are almost no words to explain everything you did to protect my family,” Molina said.

“We are relieved that Jose’s situation has come full circle and he is now a US citizen,” said Local 983 President Joe Puleo.

He and his family had unflagging support from Puleo and the Local 983 executive board, DC 37 Executive Director Henry Garrido, Parks Dept. managers, and City Council Immigration Committee chair Carlos Menchaca.

A team of pro bono attorneys at the Immigration Defense Project and the New York Immigrant Family Unity Project took on Molina’s case and worked for years to affirm his right to due process under the law. They eventually won Jose’s freedom in 2017 and also processed his US citizenship application.