DC 37 members, retirees and leaders were honored by the Mets during the singing of the national anthem at a ballgame at Citi Field on Aug. 7. Photo: Clarence Elie-Rivera.

The ticket winners joined DC 37 Executive Director Henry Garrido on the field Aug. 27 for the singing of the national anthem, along with Dilcy Benn, president of Local 1505, Don Nesbit, vice president of Local 372, and Director of Community Partnerships Raul Rodriguez, who coordinated the event.

“This was a truly amazing night to have the home team, the New York Mets, take time to honor the union members who make New York City run,” Garrido said.

The contest drew a tremendous response from more than 3,000 members and retirees who receive DC 37 Action Alerts and News emails and signed up for the chance to win. The first 50 people to respond were awarded two tickets each to the Mets vs. Cubs night game. Winners responded within 40 seconds of receiving their Action Alert emails, Rodriguez said. 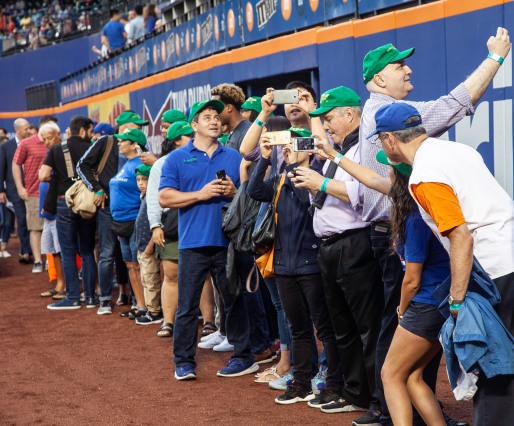 Fifty members and retirees won free tickets to the Aug. 27 Mets game after responding within 40 seconds to an announcement of the giveaway in a DC 37 37 Action Alerts and News email blast. Photo: Clarence Elie-Rivera.