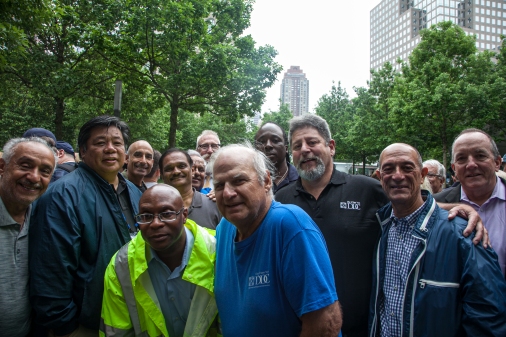 Local 375 members who were part of the clean up of the World Trade Center site attended the dedication of the memorial. Among those were (front row) Said Daryani, Mario Sirban, Clifton Oates, Charlie Orlando, Mike Kenny, Pete Ciaccio, and Mike Burton. Photo: Mike Lee

“It is 17 years since we completed the cleanup of the World Trade Center site. We’re not going to be here that much longer, you know?” said Local 375 member and Dept. of Design and Construction Project Manager and Chapter 4 President, Mike Kenny at the dedication of the 9/11 Memorial Glade near the World Trade Center on May 30.

Kenny was part of a contingent of DC 37 members — veterans of the Sept. 11, 2001, terrorist attack — who spent months of arduous rescue and recovery work at the site.

At the Thursday morning ceremony, the greenspace at the site was packed with spectators; elected officials; workers who toiled at the site, and family members. They congregated under the morning’s gray sky to remember the dedication of thousands of public workers and volunteers who risked their lives to help seal the wound caused by the 2001 event, which took more than 3,000 lives.

“Everybody’s sick one way or another, and we’ve had nine members already pass away,” said Kenny, reflecting on the crew of DDC workers who spent months who worked at the site.

“The Department of Design and Construction was the lead agency after the first 30 days,” he said. “We stayed low-key and did our job,” he said.

While memorializing the public workers who risked their lives — and paying a price with long-term and fatal health issues — the union backed an effort to call on the U.S. Congress to permanently authorize the September 11th Victim Compensation Fund Act, otherwise known as the Zadroga Act.

The bill finances the fund for those who suffer health issues from the 9/11 attacks until fiscal year 2090.

Although the Zadroga Act was extended in 2015, the fund is only allowed to take claims until December 2020. If Congress does not pass the legislation, funding for pending and anticipated claims are threatened.

As PEPtalk goes to press, bipartisan support in the U.S. Senate is building toward a veto-proof majority and a final vote on the bill is expected soon.