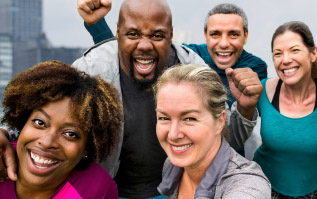 It’s on! A 12-week weight loss competition among four city agencies, dubbed The NYC Battle of the Badges, began June 3.

Team up with your coworkers now to compete against other agencies and WW (Weight Watchers® reimagined) will donate up to $20,000 to a charity chosen by the winning agency.

The four uniformed agencies participating in NYC Battle of the Badges are the Dept. of Corrections (DOC), Sanitation (DSNY), Fire (FDNY), and Police (NYPD).

Participation is free and voluntary. Teams should consist of 8 to 10 people. The more people who sign up, the bigger the jackpot.

To build the jackpot, WW (Weight Watchers® reimagined) will contribute $5 for every participant and $15 more for each new or current WW member who participates.

The agency with the greatest percentage of teams achieving the six (6) percent average weight-loss goal wins.

NYC Battle of the Badges is administered entirely by HealthyWage.

Sign up now at www.nyc.gov/ww and help spread the word!

DC 37 and the City of New York support union members living healthier, active lifestyles at work and at home as they work to maintain a vibrant, safe and thriving city: