District Council 37 and 32BJ, two of New York City’s most politically active unions, recently announced their joint support of Monique Chandler-Waterman for City Council in the upcoming special election in Brooklyn’s 45th District on May 14. 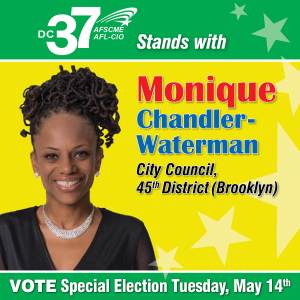 “Monique Chandler-Waterman is the clear choice to continue the work of (former City Council member) Jumaane Williams, who was elected NYC’s Public Advocate in February.

“As a teacher, community advocate and organizer, Monique has long been at the forefront of working to overcome the challenges facing her community. The non-profit she started, East Flatbush Village, provides youth and community development services and is an impressive example of her longstanding commitment to justice and equity in Brooklyn. With Monique in the City Council, we can make real progress on the issues that matter most: strengthening workers’ rights, creating good jobs and affordable housing, and securing adequate funding for our public schools.

“Together, members of 32BJ and District Council 37 will work to elect Monique Chandler-Waterman the next city councilmember representing the people of the 45th District.”

DC37 is NYC’s largest union of municipal employees, with 125,000 members and nearly 50,000 retirees – and is part of the American Federation of State, County & Municipal Employees (AFSCME).