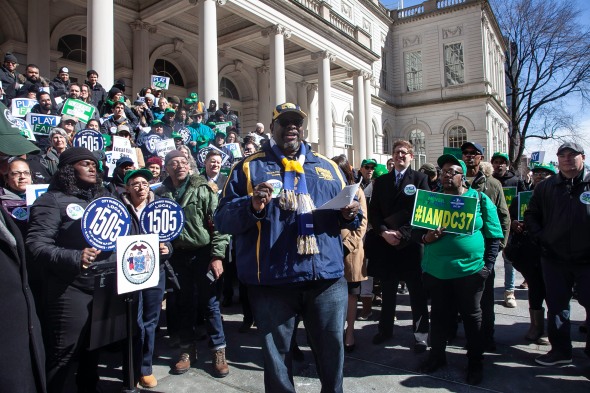 DC 37 joined 40 parks advocacy groups and lawmakers for a noon City Hall rally Feb. 28 to demand $100 million in funding for public parks maintenance and safety in the FY 2020 city budget.

“This is a no brainer — better parks makes for a better city. Our members keep city parks clean and safe for 130 million people who use them each year,” said DC 37 and Local 372 President Shaun D. Francois I. “Our city should lead the country, setting the standard for well-maintained, beautified public parks.”

DC 37 is part of the Play Fair campaign that calls for the mayor to add $100 million to the city budget for year-round Parks Dept. maintenance, cleaning and gardening jobs.

The Parks Dept. oversees 30,000 acres or 14 percent of the land in New York City, but the agency only gets $534 million, less than .06 percent of the annual city budget. Advocates said the city can do better.

Grodenchik convinced 40 of the City Council’s 51 members to co-sign a letter urging de Blasio to add extra funding now. He said, “Dozens of city parks have received millions in capital improvements but without adequate funding for maintenance and safety, it’s a waste.”

“Budget cuts over the years have decimated the Parks’ unionized workforce,” Benn said. “Adding funding could reverse that trend and provide job security for 150 City Parks Workers and Gardeners and their families.”

Play Fair and the union said an additional $100 million would fund:

Parklands are not a luxury. Urban parks temper climate change and remove over two million tons of carbon emissions each year for cleaner air and ecosystems in New York City.

“Parks are essential infrastructure,” said Joe Puleo, president of Local 983. “Funding Parks will improve the environment and communities. Well-maintained and safe public parks improve the mental wellness and health of everyone who uses them.”

Copyright © 2021 Start a Blog at WordPress.com.