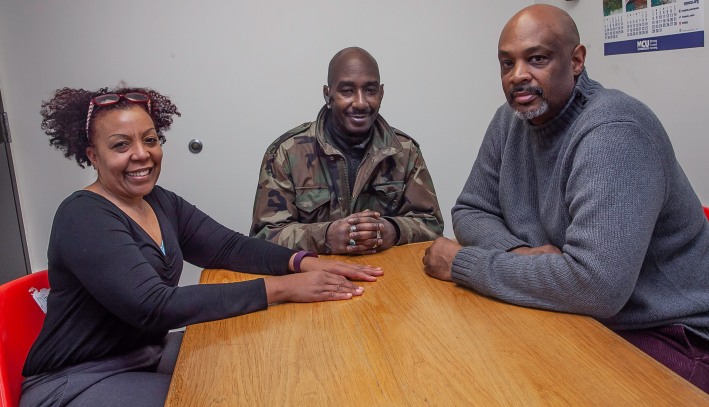 Morris Johnson lived in two rooms in a rambling old house he shared with longtime friends that he considered family.

The house where Johnson lived was in an East New York neighborhood bordered by elevated train lines, just down the hill from the Jackie Robinson Parkway and Brooklyn’s Evergreen Cemetery. It was Johnson’s home for more than a decade.

“I’m blindsided,” said Johnson, 65, who bikes to work each day at the Dept. of Health and Mental Hygiene in Long Island City.

“I came home to find the sheriff locked the house. The family– a mother and her three grown children — cut out,” Johnson said. In January the house was foreclosed, and seized by the bank.

“They never said a word to me about their financial problems,” he said. “They just moved on. I had to put my stuff in storage. I found a room at a nearby hotel. Basically, I was homeless.”

Shocked by his reversal of circumstances, Johnson said, “After work I’d still go home not realizing I didn’t lived in that house anymore. When I saw it all boarded-up and padlocked, that reality really hurt me.”

He told his DOHMH coworkers about his situation and the supervisor said the union might be able to help.

“Through the union’s Help Our Own Fund, MELS and MEHP we helped Mr. Johnson find an apartment in Bedford-Stuyvesant,” Nadal said. The union provided a small grant to cover his storage costs and arranged for Catholic Charities to assist with furnishings.

“Unfortunately, this is not a unique situation,” Nadal explained. Rents in New York City make finding and paying for housing a challenge, especially for working people. “While each case is different,” she said, “the union can intervene when a member faces housing difficulties. We can prevention evictions, provide attorneys for Housing Court, and more.”

“The union is more than just negotiating wages and pensions, DC 37 is committed to social justice and meeting members’ needs at every turn,” said Local 420 President Carmen Charles.

Johnson said, “I am still absorbing it all. I am grateful to my coworkers and supervisor and my union for being there for me.”