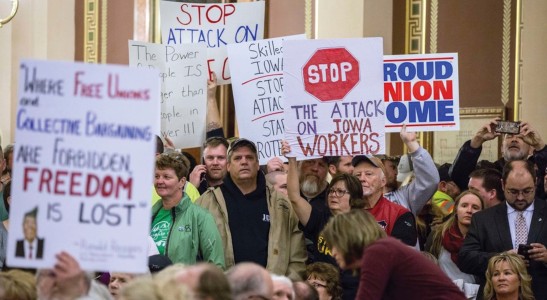 A right-wing network of foundations and front groups has spent decades trying to wipe out unions.

One of those anti-union foundations is the Milwaukee-based Lynde and Harry Bradley Foundation.

“We are up against a conservative network that is sinking millions and millions of dollars into destroying unions,” DC 37 Executive Director Henry Garrido said. “Anti-labor right wingers are now establishing a beachhead in New York, where they are bringing their message directly to union households and attacking unions in the courts.”

Since 2003, the foundation has allocated $1.2 million to support state union-busting legislation, according to the Center for Media and Democracy. The center has studied thousands of Bradley’s internal documents. The documents show how the foundation is carrying out the conservative network’s agenda of dismantling unions and turning blue states (Democratic) into red states (Republican).

Key forces in the anti-labor network that count on support from Bradley include:

● Richard Berman: Public relations operative Richard Berman built his career on attacking unions and lobbying for conservative corporate interests. Berman and Co. is known for setting up what the Center for Media and Democracy describes as “propagandistic” websites to spread disinformation about unions and pro-environment, animal rights and consumer groups. Berman has carried out PR campaigns against teachers unions to help the Bradley Foundation with its work to promote taxpayer-funded vouchers for private and religious schools.

● American Majority: The Bradley Foundation contributed $1.8 million to American Majority between 2010 and 2016. Over the years, this group trained 38,000 grassroots workers, according the group’s website.

The grassroots work of American Majority and other right-wing groups partly explains the Republican Party’s capture of legislatures and governorships.

The Republicans now control both chambers in 32 states. Today, 34 states have Republican governors compared to 15 states with Democrats.

The Bradley Foundation’s effort to build what it calls a “conservative infrastructure” throughout the country is in sync with the goal of the libertarian brothers David and Charles Koch to transform the political landscape of the United States. Bradley — with $835 million in assets in 2016 — is as large as the three Koch-family foundations combined.

This political transformation sought by the right’s network has many dimensions. Foundations promote a right-wing ideological perspective as they advise politicians and spew out position papers on government policy. Conservative groups on university and college campuses are creating a new generation of activists and zealots.

Unions, of course, are targeted because they have a powerful ground force that supports Democratic candidates; gives workers a voice in the workplace; protects government services and fights for political freedoms and a shared prosperity, an effort that could put an end to the country’s Great Depression-like inequality.

Often working outside of the public eye, the foundations are a hidden but key force in the effort of the radical right to solidify the power of the 1 percent, corporations and conservative ideologues in the United States.

It’s up to unions and other progressive organizations to stop them.

This article originally appeared in the October 2017 issue of Public Employee Press.